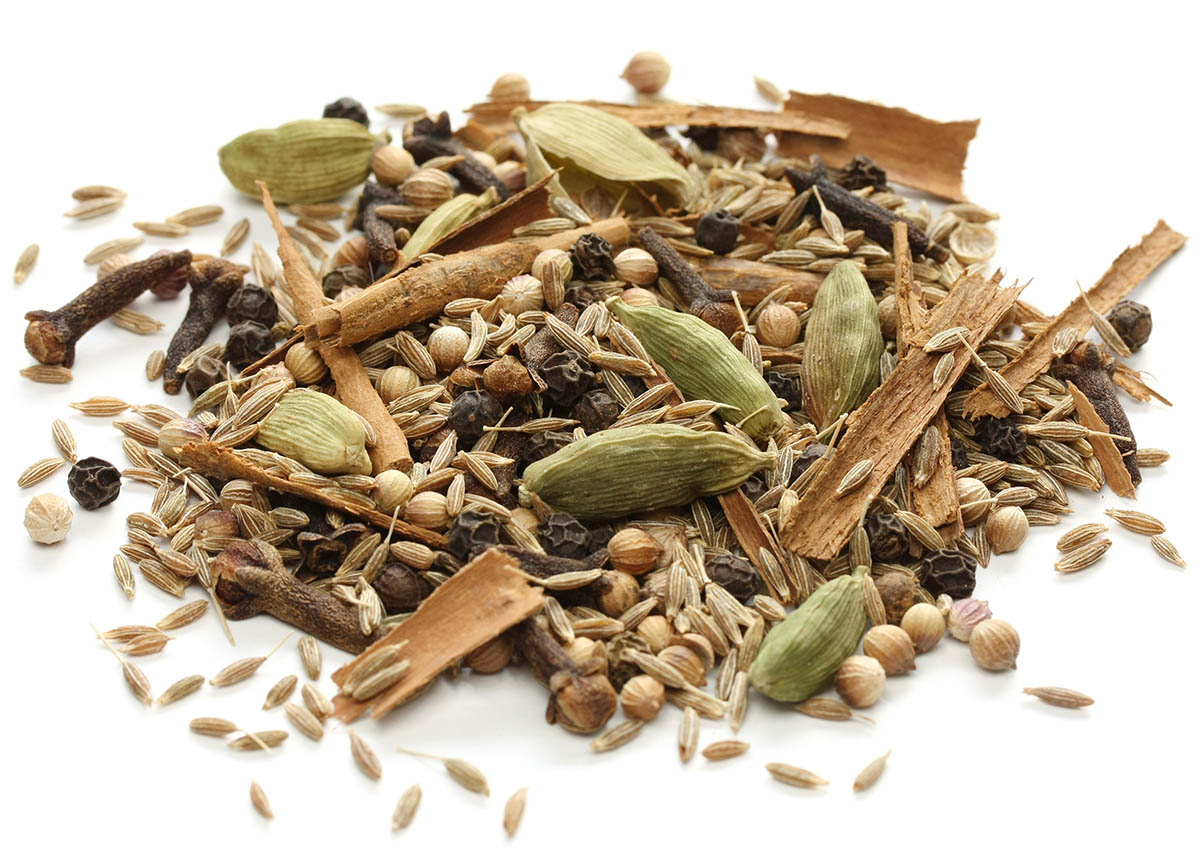 India has given the world so many things to be grateful for. Shampoo, the number 0, deep spiritual teachings and, of course, yoga.

The most widely-appreciated contribution, however, is probably the cultivation and use of spices.

If it wasn’t for India, our food would most likely taste a whole lot blander today. Also, we wouldn’t be able to enjoy the amazing health benefits derived from these plants.

One of the most popular spice blends in India is called garam masala.

It’s a potent mix that can make even the blandest of meals interesting.

However, there’s more to it than just taste.

In this post, learn about the 9 powerful health benefits of garam masala, how you can make it yourself, and the best ways to use it.

What Is Garam Masala Made Of?

When translated to English, garam masala simply means “a hot mixture of spices”.

“Hot”, in this case, refers to the blend’s use in Ayurvedic medicine — where it’s valued for ‘heating up’ the body.

It’s thought to be especially useful for increasing what has been called “digestive fire” — making it easier for the body to process food.

The ingredients of garam masala varies a bit between regions.

However, the most common mix is:

If you’ve read through our post “22 Healthiest Herbs & Spices In The World”, you’ll recognize these — they’re all included.

It’s no wonder, then, that garam masala comes with so many powerful health benefits.

The traditional idea that garam masala increases ‘digestive fire’ seems to have something to it.

Cumin, one of the major components of the mix, has been shown to boost the activity of digestive enzymes.

One study even concluded that an extract of the spice could be used to treat irritable bowel syndrome (IBS).

Black pepper, another common ingredient, has also been found to have beneficial effects on our digestive system.

On top of that, one study found that eating food with garam masala was associated with faster digestion time in healthy adults.

Bottom line: If you’re having trouble processing your food, try spicing it up!

By themselves, each of the spices in garam masala contain powerful antioxidants.

When you mix them together, though, you get a whole new level of potency.

While all of the components contribute, there are a few that stand out.

The strongest of them all is actually cinnamon.

In a Chinese study from 2005, 26 different spices were analyzed to see which contained the most antioxidant activity.

After the scientists had carefully tested each spice, cinnamon was placed at the very top of the list.

Other notable mentions are cardamom and clove — both of which have shown exceptional antioxidant potential.

Additionally, coriander has been known to lower total cholesterol and triglyceride levels.

These are some seriously impressive effects that should not be ignored.

After all, heart disease is still the number one killer worldwide.

If we can use food and natural supplements to greatly reduce our risk, we should do so.

Keep in mind that garam masala is both affordable and extremely low in calories.

This makes it a reliable source of heart-healthy compounds that can be easily included in your day-to-day life.

The issue of bodily inflammation has increasingly become an issue in the modern world.

Whether it’s subtle and low-grade or sharp and in-your-face, it can deal some serious damage over time.

In recent years, chronic inflammation has been strongly linked to many age-related diseases (“inflammaging”).

Sure, the sources of inflammation can often be hard to eliminate completely.

Still, we can heavily diminish the symptoms by having a healthy lifestyle and diet.

Cardamom in garam masala has been shown to lessen inflammation in the body.

When it comes to the world’s top killers, cancer is steadily climbing up the ranks.

In high-income countries, it’s frequently listed in the top 5.

Thankfully, according to studies, most cancers are preventable — being highly influenced by various lifestyle factors.

One of the most important factors is our daily nutrition.

As it turns out, the ingredients of garam masala are all useful when it comes to cancer prevention.

Cloves, in particular, have been shown to promote normal cell function, inhibit tumor growth, and even help control the early stages of lung cancer.

According to studies, it would seem so.

There are several components of garam masala that have shown potential in this area.

According to a study from 2006, a compound in nutmeg called macelignan can kill many types of bacteria responsible for tooth decay.

Cloves have also been found to be useful when it comes to oral health — defending against gum diseases like gingivitis.

Finally, there’s cardamom, which has demonstrated an effect against microorganisms that cause dental caries.

Yes, you read that right.

Simply spicing up your meal can increase its overall nutritional value.

This could be a huge benefit — especially for those living in developing countries where food preparation may be lacking.

So, how does garam masala increase the bioavailability of foods?

It all comes down to one single ingredient: Black pepper.

Or, more specifically, a compound in black pepper called piperine.

Piperine is what gives the spice its pungent taste.

When added to a meal, it can significantly increase the absorption of minerals and vitamins.

In fact, it’s been shown to be so potent that it can enhance the effects of certain drugs as well.

Diabetes is another major disease that plagues the modern world.

Like cancer, diabetes is most often the result of lifestyle factors.

One major risk is, of course, being overweight.

The other big one is diet — what you are and are not eating on a daily basis.

Research has found that a multitude of spices can be protective against diabetes.

The most effective of them all is cinnamon.

Cinnamon is a popular ingredient in many pastries and other treats.

Because of this, most people don’t think of it as a blood sugar regulator.

Still, several studies have pointed out its beneficial effects (1, 2).

Nutmeg has also shown potential in this area.

Garam masala could be useful when it comes to preventing Alzheimer’s and other neurological diseases.

As mentioned, all of the commonly-used spices in garam masala are high in antioxidants.

This is important, because natural antioxidants have been found to be protective against neurodegenerative disorders.

The piperine in black pepper has also shown promising results in regards to this issue.

Neurological disorders like Alzheimer’s can be very scary to think about — especially it you’ve witnessed someone close to you suffer from it.

Still (as with diabetes, heart disease and cancer) research suggests that you can greatly reduce your risk with the right lifestyle and diet choices. Garam masala is normally quite cheap, since it’s made mostly of common spices.

I prefer this organic mix from Iherb, which I throw in every now and again when doing my bulk orders.

Besides containing only organic ingredients, it’s also the most convenient.

Of course, you can also make garam masala at home if you want, as long as you have all the needed components.

Here’s a simple recipe you can use:

– In a bowl, mix and grind all of the spices together until they’re evenly distributed.

– Store the finished blend in an airtight container to retain most of its flavor.

And there you have it — your very own garam masala, ready for action!

How To Use Garam Masala

When it comes to spices, tastes vary a lot between individuals.

You might want to experiment with the blend and see what foods you enjoy it with.

The blend goes well with pretty much any savory meal.

Whatever you prefer, garam masala won’t disappoint when it comes to exotic flavors and powerful health benefits.